Using the VisionAI DevKit to capture photos to Azure regularly

Overview
I've been playing lately with several IoT devices, from the Raspberry Pi to the Jetson Nano, and one (very simple) pet project I wanted to set up was to have one of the these devices capturing photos and uploading them to an Azure Storage Account, and then do either time lapses, or just use them for security home monitoring.
The issue with these small devices is that they're fiddly - they need boxes, power, be correctly positioned, can be fragile, etc., so I decided to use my Vision AI DevKit for this. 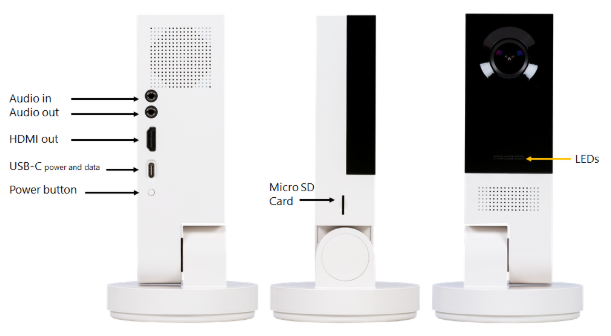 The camera is sturdy and has a wide-angle lens, the position is adjustable and the base is heavy/stable, it has built-in Wifi, runs Azure IoT Edge and can be powered with USB-C. It also has built-in ML capabilities (it can run neural network models on a Qualcomm Snapdragon chip pretty fast), but I don't actually want to run any ML, just upload photos regularly. It does use more power than my Raspberry Pi Zero with a camera, that's the main downside.
For my time-lapse use case, I need photos regularly, while for the security one I want to make sure photos are uploaded as fast as they are taken (for which I assume both power and Wifi are on). For this reason I decided to not do any local processing, just upload the photos ASAP and process them in Azure later. I'd save bandwidth by doing processing on the camera, that's not really an issue.
Starting point
I started with one of the Community Projects available for the camera, the Intelligent Alarm by Microsoft colleague Marek Lani. His project is entirely on GitHub, and he has a more complex setup than what I need -- he's doing object recognition on the edge as a trigger for a photo upload, which I don't want to do. He actually has a repo on GitHub for the image capture part of his project: https://github.com/MarekLani/VisionDevKit_CaptureModule . The reason this is relevant is because he is capturing images from the camera using ffmpeg over the built-in RTSP video feed (and calling it from NodeJS), instead of using the SDK's capabilities to take photos. Doing this later option can mess up local ML processing and require a reboot of the camera. So my work was simplified to adapting his code for my scenario.
Code changes
- Modify the capture code
The first thing I did was to look at Marek's app.js file. His code captures a photo whenever a message is received from IoT Hub (more correctly, from another container/module running on the camera). I just commented all of this block and replaced it with a call to the function that calls ffmpeg to capture the photo, TakeAndUploadCaptureFromStream(); . In more detail, I commented out the pipeMessage function and the whole IoT Hub block starting with Client.fromEnvironment.
The second thing was to find a way to call this code regularly. The classical solution to do this is to use cron, and that's what I did, following some hints from this thread on Stackoverflow. So here are the steps:
- Created a cronjobs file with content:
* * * * * node /app/app.js > /dev/stdout
This setup means the command is called once per minute. The redirect is actually not working, I want it to redirect the output to the docker log, but I get an error when I use "> /proc/1/fd/1 2>/proc/1/fd/2". Something to come back to.
- Modified the Dockerfile.arm32v7 to contain:
FROM arm32v7/node:12-alpine3.11
WORKDIR /app/
RUN apk add  --no-cache ffmpeg
COPY package*.json ./
RUN npm install --production
COPY app.js ./
# copy crontabs for root user
COPY cronjobs /etc/crontabs/root
USER root
# start crond with log level 8 in foreground, output to stderr
CMD ["crond", "-f", "-d", "8"]
The changes were:
And that was it. I already had a provisioned IoT Hub and the camera registered as an IoT Edge device, as well as an Azure Container Registry to host my container images, and a Storage Account to drop the photos in, so I just had to:
After giving a few minutes for the IoT Edge runtime to download and get the container running, my Azure Storage Account now shows the incoming photos:

And this is what is running on the device:

Which matches the configuration on Azure IoT Edge:

Next Steps
After this base setup, my next step is to trigger the execution of an Azure Function or Azure Logic App on a schedule to compare the last two images to check for deltas, or to check if there's a missing photo (indicating camera is possibly off) and then triggering an email alarm. I already have some code to do image processing on an Azure Function (GitHub repo here), which will help.
Hope this helps anyone, and thanks to Marek Lani for his work on the Intelligent Alarm sample.
**EDIT**
Turns out I had to iron out a couple of glitches in the last few days.
The first was this: after 6-7 hours of image capturing, the AIVisoinDevKitGetStartedModule module would stop working, the container would die and restarting it didn't change the situation. Because the capture module depends on the RTSP stream this exposes, it would also stop. The problem turns out was disk space -- something is filling up the /tmp folder with core* files. My first thought was to again use a cronjob, but cron is read-only in the device, so I went the manual way:
- created a file remove_temp_files.sh in folder /run/user/0, with this content:
#!/bin/bash

Setting up and configuring the Nvidia Jetson Nano

I recently purchased a Nvidia Jetson Nano to experiment more with Edge ML and Azure IoT Edge, in particular for image/video processing, and in this post I'll describe my setup steps. There are some excellent tutorials on how to do this, but I thought I still wanted to put this up -- a) in case someone else bumps into the same issues I did, and b) if I want to repeat this setup in the future.
Packing list
Here's what I bought:
I quickly realized I should have bought an IPEX MHF4 antenna -- the wireless adapter sits under the heat sink, and has poor Wifi connectivity. I'll buy this, together with a fan and perhaps an enclosure/box.
Hardware setup
After doing this base setup I connected the Jetson Nano to a monitor with HDMI, USB Keyboard and mouse, and plugged in the charger, only to find that it didn't turn on. I had to use the mini-USB to power it, which proved unstable -- the Jetson would just turn off after a few minutes. I'm not sure why this was, as I wasn't doing any compute, but I speculate it may be related to the large resolution of the monitor.
I eventually found out that there's a jumper you have to set that configures the device to either use the microUSB or the external charger for power. This is jumper J48, which on the B01 sits behind the HDMI output and the place where you plug the external charger.
As it turns out there's a lot of information on this configuration, how power for the Jetson Nano works,  and how to do this. For example:
On the B01 the plastic piece is provided but it's just sitting in one pin, I just had to take it out and put it over both of them.
After doing this I was able to keep the Jetson Nano stably turned on, configured it using the start-up user interface, and successfully tested SSH.
Before continuing, and while connected via SSH, I installed Jetson Stats, following the instructions here: https://desertbot.io/blog/jetson-nano-power-supply-barrel-vs-micro-usb . You'll be able to see interesting stats on the use of the chip's resources (RAM, CPU, etc.) by running sudo jtop.
Configuring remote connection
I mostly want to use the Jetson Nano headless, i.e., without having the keyboard/mouse/monitor connected to it. Getting this to work took me down a path of some pain.
The first suggestion I tried was to use VNC with Open Vino. There is a text document on the Jetson Nano on how to do this, but these instructions don't work. Anyway, on the meantime I also found out that VNC requires you to have a running UI session on the device, and then you connect to it. This means that every time I shut down the device, I would have to plug-in the HDMI, keyboard, etc., log in and then disconnect. Scratch VNC.
After VNC I went the RDP route, and installed xrdp. Considering I mostly use Windows 10, Remote Desktop is the perfect option. I followed the steps described here https://www.hackster.io/news/getting-started-with-the-nvidia-jetson-nano-developer-kit-43aa7c298797 , in section Enabling Remote  Desktop. By the way, this article is one of the best guides on how to set up the Jetson Nano I've found, if you want step-by-step clear instructions.
When trying RDP, however, the session would start, show the Nvidia logo, and close again. Turns out that (according to this https://forums.developer.nvidia.com/t/issue-with-xrdp/110654/21 ), there's an issue with Gnome, the desktop windows manager, and one of the libraries it uses. Which led me to just install xfce4, as suggested in the previous link. This solved the issue and I could now connect using remote desktop.
The story wasn't over however. When connected, I noticed the terminal console wasn't opening, and apparently this is because it was trying to use the Gnome terminal. This link gave me the solution, I had to install the xfce4-terminal and configure it: https://askubuntu.com/questions/1143558/gnome-terminal-failing-to-launch-in-ubuntu-18-04-chrome-remote-desktop-broke-gn .
So to summarize:
Done? Not yet.
Wifi Connection Drops / Wifi Power Save
While doing the previous steps, I noticed my connection to the Jetson was very unstable. The SSH kept dropping and pings would fail. Initially I thought this was due to the lack of antennas on my Wifi adapter, but turns out it was due to the fact that it was being put to sleep by the OS.
The first solution was to do what is suggested here: https://unix.stackexchange.com/questions/269661/how-to-turn-off-wireless-power-management-permanently , to change a setting in file /etc/NetworkManager/conf.d/default-wifi-powersave-on.conf . This doesn't work.
The second solution was from here https://desertbot.io/blog/jetson-nano-usb-headless-wifi-setup-edimax-ew-7811un and run "sudo iw dev wlan0 set power_save off". This actually runs, but it's not persistent across reboots.
The third and final solution was to follow the steps here: https://github.com/robwaat/Tutorial/blob/master/Jetson%20Disable%20Wifi%20Power%20Management.md . These instructions are for the Nvidia Jetson TX2 but also work with the Jetson Nano. Note that the instructions assume gedit is used to create files, but I used vim instead -- so replace as appropriate with whatever text editor you have installed.
I don't know if this issue is specific to the Wifi adapter I'm using, and if it also happens with USB Wifi adapters, but I found quite a few people asking for help with this and several of the previous challenges I had. Have to admit this wasn't the best user experience I've ever had.
So what's next? Setting up Azure IoT Edge and trying it with DeepStream: https://github.com/Azure-Samples/NVIDIA-Deepstream-Azure-IoT-Edge-on-a-NVIDIA-Jetson-Nano . I'll write about how it goes.
Posted by João Pedro "jota" Martins at June 08, 2020 No comments: