[this post was written for the 2018 Q# advent calendar]

Two colleagues recently went to Microsoft's internal Machine Learning and Data Science conference, and recommended a tutorial they did on-site, on Quantum Machine Learning. The materials for this lab have just been published on GitHub, and the following are my learnings while doing it.

The lab is implemented with Microsoft's Quantum SDK, using Q# for the Quantum code and C# for the driver code. The goal is to implement a Classifier, a discriminator able to classify a value into one of two classes -- just like a Logistic Regression classifier. Or in other words, a Quantum Perceptron. It is simple to implement if you know the core concepts of Quantum Computing, and most of it is very guided -- you just have to fill in the blanks with the right Quantum primitives, following the instructions in the comments.

Simplifying, what the algorithm does is as follows: imagine you have a pizza cut in two halves at a given angle 𝜃, and the angles higher than that are of class One, and Zero otherwise: 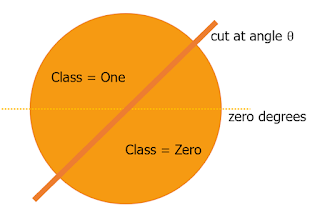 You also have a labeled training data set, specifying for a large number of angle values what the class/label is:

Note that the angles are represented in radians (i.e, the full circle is 0 to 2*PI) instead of 0-360º, but that is a detail. This is equivalent to having normalized data between 0 and 1.

The goal of the lab is first - to implement an algorithm that finds what the separation angle 𝜃, and second - classify new angle values as either class Zero or One. Finding the separation angle (which is equivalent to training a logistic regressor and finding its parameters) is achieved with a mixed of C# and Q# code, while doing the classification is purely Q# quantum code.

Some of the issues that confused me while doing the lab were the following:

Finding the angle - the underlying logic of Quantum Computing features a lof of linear algebra (matrixes) and trigonometry (angles). One important thing to keep in mind is that what the algorithm needs to find is not the separation angle at which the pizza was cut, but an angle perpendicular/90º to it. In the following code snippet, the separation angle is 2.0 (equivalent to 114.6º), but the angle that the algorithm needs to find is "correctAngle". By adding or subtracting PI/2 we get the perpendicular angle:


The reason for this is related to the quantum transformations available to us. The slidedeck in the Github repo talks about this, but it wasn't immediately clear to me when I read it.

Success Rate - the Main() in the provided C# driver relies heavily on a Q# operator called QuantumClassifier_SuccessRate. What this does is find how well the quantum algorithm can classify the data points in the training data, for a given angle it is called with. The Q# operator returns this as a percentage.
The C# code then calls it multiple times with different angles using ternary search (imagine a binary tree search, but with 3 'halves'), until the error rate is low enough. This is the bulk of the training process, and when it ends it has found a good approximation of the "correctAngle" mentioned above (note that it's not looking for the separation angle 𝜃).

The QuantumClassifier_SuccessRate calls two other operators:
Finally, the logic of the QuantumClassifier_SuccessRate itself includes two loops: one to iterate over all the values in the training dataset (0..N-1), and the second repeats each Validate operation several times (1..nSamples, where nSamples = 201 by default) to account for the probabilistic nature of Quantum Computing when you do a Measurement. Again note that nSamples is possibly a misleading name -- this doesn't refer to data samples, but to iterations of the algorithm. You can reduce this number to 100 for example, and you'll see the quality of the predictions will go down.
Doing predictions - as I mentioned in the beggining, a big part of the exercise is working on the training code, implementing the 3 operators mentioned above. For this second part, you have to implement:

a) C# code to generate a new dataset, the test dataset which you will ask your Quantum code to classify;

b) Q# code to actually do the classification. For both parts you can reuse/adapt code you have done before. This is what I ended up with:

This code then does the following correct predictions based on a new data set:

And that's it, your Quantum Perceptron is finished :). Now we only need hardware to run it!

While working on the lab I've gone and looked around on the web and found two articles that seem to be related to the approach followed here: "Quantum Perceptron Network" [paywall] and "Simulating a perceptron on a quantum computer", both possibly worth taking a look.

If you already have some basic knowledge of both Machine Learning and Q#, you should expect to spend maybe 2 hours on it.
Posted by João Pedro "jota" Martins at December 06, 2018